My house is full of bugs. Brown beetles that arrive in droves to nest in my clothes and die, sluggish and noisy cicadas that bumble screaming along the walls before they give up the ghost. Flies that alight on any drop of water and streams of ants to attend the piling dead.

We’re in the canícula now, a period I don’t remember from last year but which is somehow even worse than the thirty-day low-pressure heat-migraine that bloats above the month of May. We’re in the drought that shouldn’t be, the pause between the rains, already forgetting the climactic, cooling downpours of June and looking forward to the weeklong torrents of September that will take us into autumn and the blessed cool after the Day of the Dead.

The canícula is a bad time. A dead time. Cuts are slow to heal, animals fall sick, hair cut in these weeks will not grow until they end. Every day feels like the choking humid build to a thunderstorm that never comes, the temperatures of each tomorrow building on yesterday’s high. These are strange, malportentious days for beasts and men.

But not for the bugs.

I live on the high end of a long valley of which Jalpan occupies one side; our reservoir and river form one fork and the arroyo in front of my house the other. It runs dry most of the year, but between June and November you can hear it from the porch. It’s not flowing now, but the moisture it brings to the scrubby forest out front makes my woods briefly a jungle and a breeding ground for all my houseguests.

Light drawing moths is an axiom, but when you live in the real countryside, you begin to realize that light draws everything, and here on the outskirts of town, my lights have no competition. Every flying, creeping, chittering thing for a half-mile around comes my way when the sun sets around nine. You might say, ‘Well, then, turn the lights off,’ but I get off work at six, which means seven, and after the walk home and the obligatory piss-warm shower, there’s not much daylight left for anything, and with the sun setting early behind the mountains, the falloff in day length since the solstice has been precipitous.

It’s a slow buildup, a few lonely moths and late-day butterflies pirouetting around the bulb I use to write, out here in the hallway, but before long it’s a menagerie, metallic and machinelike scarabs rubbing plates with daddy longlegs and clouds of biting aphids. Miniature mantises share wallspace with the iridescent and adorable jumping spiders that colonize my clothes and work-desk while their larger and more ambitious cousins weave tapestries in all the corners of my rooms. The beetles surprise us with their clumsiness; they whip against the lights, the table, my head, my typewriter, and their feet pinch tight when they manage to land on skin. James and I can’t understand how they survive in the wild when my eco-bulbs leave them permanently turtle-up. We break up our endless talking evenings Florence Nightengaling them upright again. 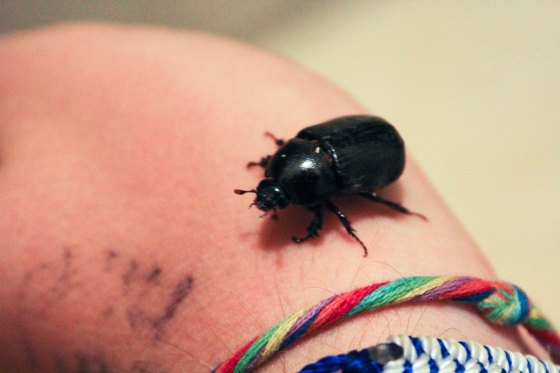 I knew I came to Mexico to help somebody

A lifelong aversion to squirming many-legged things is fading away in Mexico. Fork-tailed serrano earwigs that used to give me the creeping spaz when I found them in my towel now get a leisurely brush-off. Last year I cut most of my summer bed-reading because of the clouds of gnats and other, meatier things that found my face and chest in the glow of my phone. Now if I fall asleep reading, I wake to a carpet of tiny dead and dying things amberized in old sweat. At home a bug in a drink is cause for a refund, but here when my mouth breaks the surface tension in my pitcher and sends a hundred swimming ants to the other side of the water, it’s more than enough space for me to drink. When I sip in the dark, I forget to think about it.

By the end of his service, Danny Schmidt had decided to allow any bug that made a home in his home to live in peace. I thought his collection of legitimately dangerous widows and recluses terrifying back in my first month on the ground, but now I understand him. You can’t fight a tide and most all of them are happy with a truce.

But there are exceptions. I know biologists here who like to pick up cockroaches and squeeze them for the curious whining they make, but there’s something deep-seated, born of lifting up Nashville welcome mats and seeing the teeming brown beneath them, that I can’t let go. And they used to be rare. But either the changing weather or my new housemates have brought them down, and a good week sees two or three. I’ve almost no food in my house, all in the fridge, so I don’t know what they’re after, but they tend to be after it in my shower and I don’t abide.

At least they’re safe. Halfway through Holy Week in April, I set to dish-washing. Cleaned two plates, a few glasses, and some silverware before I lifted a pot and found a six-inch scorpion nestled in its upturned lid. Scorpions are not a thing for human eyes. You might think their armored plating makes them rigid and skittering, but they’re sinuous and wormlike, quick runners and able climbers, just as adept at squeezing themselves through small holes as mice and roaches.

Their pinchers are not “claws” but “palps,” made for grabbing rather than cutting, lined with little hairs that let them stick and double for antennae. They have no visible, personifiable head, the palps emerging from the body like some thing unknown; their mouth sits face-down and has no teeth but a panoply of tiny arms that tear bits from prey and set them in a pouch to be dissolved by acids. They breathe through a book lung, a hole on the underside of their lower abdomen filled with platelike membranes that look like the pages of a closed book. It should make them easy to drown, sincle they’ve little ‘blood’ and no space to store oxygen, but my guest lived an hour under water, only occasionally trying to swim his way out with whipping tail.

After that hour I gave up, grabbed him by the tail with barbecue tongs, aluminum scraping against flexible chitin. I threw him in the street.

There are bright spots. I have hordes of fireflies out here that remind me of long, warm bedtimes in Tennessee that are still what I see when I hear the word ‘evening.’ I have these bugs: long as my last two index finger joints, the color of polished graphite, thin and hard like a stretched-out beetle, a small, separate-sectioned head and two luminous patches on its ‘neck’ that light up not intermittently but for long stretches, will-o-the-wisps and fairies glowing in my woods. If you can catch one and lay it on its back, it snaps head to body with an audible click and flips a foot in the air to alight and lift off again, looking for other lights and other loves in the sweltering night.

I’ll never miss the canícula, but some of this I might.

One thought on “Bugs”